Top technologies to be learnt in 2019 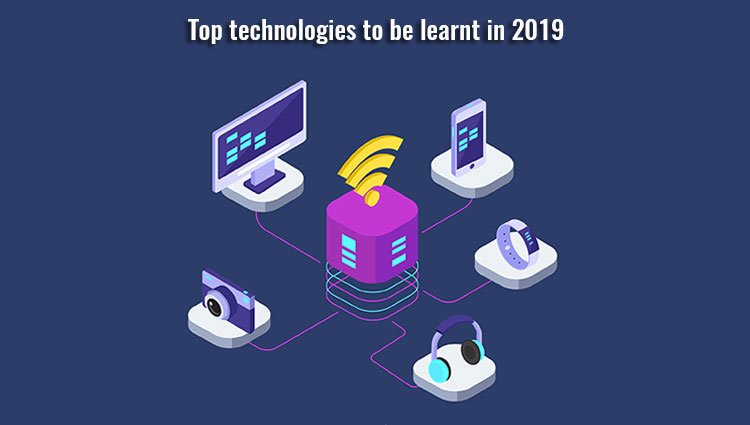 Technologies will help the world working in better and in efficient way.  It will help us in lowering cost of inputs and in many wonderful ways. Technologies are changing around time and the technology-based careers don’t change at that same speed, but they do evolve, and the savvy IT professional recognizes that his or her role will not stay the same. Here are eight top technology trends to be learnt in 2019, and some of the jobs that will be created by these trends.

Artificial Intelligence (AI) has already received a lot of buzz in 2018, but it continues to be a trend in 2019. AI refers to computers systems built to mimic human intelligence and perform tasks such as recognition of images, speech or patterns and decision making. AI can do these tasks faster and more accurately than humans. In addition to consumer use, AI is used to schedule trains, predict maintenance, assess business risk, and improve energy efficiency, among many other money-saving tasks.

AI is one part of what we refer to broadly as automation, and it is said due to automation, the world is losing jobs. But automation is creating jobs as well as eliminating them, especially in the field of AI

RPA is another technology that is automating jobs like Artificial Intelligence and Machine Learning. RPA is the software to automate business processes such as interpreting applications, dealing with data, processing transactions, and even sending replies to our emails. RPA automates repetitive tasks that people used to do. RPA offers huge number of career opportunities in IT for developers, project managers, business analysts, solution architects and consultants in coming days.

Blockchain can be described as data you can only add to, not take away from or change. Hence the term “chain” because you’re making a chain of data. It is secure due to not being able to change the previous blocks. With blockchain, you don’t need a trusted third-party to oversee or validate transactions. This security feature is used for cryptocurrency, and why it can play a significant role in protecting information such as personal medical data.

Formerly a technology trend to watch, cloud computing has become mainstream, with major players Amazon Web Services (AWS), Google Cloud Computing and Microsoft Azure dominating the market. The adoption of cloud computing is still growing, as more and more businesses migrate to a cloud solution. But it’s no longer the emerging technology. Edge is. Move over, cloud computing, and make way for the edge. Cloud computing doesn’t handle in some situations like quantity of data we are dealing increases. Edge computing is designed to help these problems and bypass latency caused by cloud computing

Virtual Reality (VR) immerses the user in an environment while Augment Reality (AR) enhances their environment. VR is primarily used for gaming but now it has also been used for training, as with VirtualShip, a simulation software used to train U.S. Navy, Army. The popular game Pokemon Go is an example of AR technology. In job portals like monster.com, the demand for job candidates with VR knowledge is up by 37 percent, but the potential employees are in short supply. That demand will only increase.

Cyber security is the new technology emerging and getting popular in 2019. The systems in the internet and the data in the systems are in high threat due to increase in cyber-crimes and threats. As long as we have hackers, we will have cyber security as an emerging technology because it will constantly evolve to defend against those hackers.

Internet of Things (IoT) is the future. Many “things” are now being built with WiFi connectivity, meaning they can be connected to the Internet—and to each other. Hence, the Internet of Things, or IoT. IoT enables devices, home appliances, cars and much more to be connected to and exchange data over the Internet. And we’re only in the beginning stages of IoT: The number of IoT devices reached 8.4 billion in 2017 is and it is expected to reach $30bn devices by the year 2020. The IoT can enable efficiency, better decision making and better safety for businesses as data is collected and analyzed. It can enable predictive maintenance, improve customer service, speed up medical care.